BACK TO BLOG ARCHIVE

Effective 1 January 2019, foreign companies providing e-services as listed below to Russian clients (1) through a data telecommunications network, (2) on an automated basis, and (3) by using information technologies, are required to register with the tax authorities in Russia and independently pay VAT to the Russian budget.

This obligation arises if e-services are provided

Previously entrepreneurs and legal entities had been recognised as fiscal agents and had transferred VAT to the budget in place of the foreign company. Effective 1 January 2019, the aforementioned mechanism for paying VAT through a fiscal agent, better known as a reverse charge, is no longer possible.

The rules apply, inter alia, to transactions conducted within a group of related companies.

The provision of e-services by a foreign company that has not registered with the tax authorities in Russia will result in the collection of a fine equal to 10 per cent of the income obtained from such activity.

e-services – what do they inculde?

The following services are classified, inter alia, as e-Services:

Clarifications of the federal tax service of Russia

It remains unclear whether a foreign company is required, after registering with the tax authorities in Russia, to independently calculate VAT

The Federal Tax Service of Russia answered this question in the affirmative: foreign companies registered with the tax authorities are required to pay VAT on their entire turnover, including “non-electronic”, with Russian clients3. In the opinion of the Federal Tax Service, the fiscal agent mechanism is not applicable here.

Obligations of the fiscal agent

Pursuant to the position of the Federal Tax Service of Russia, as a general rule, the Russian customer of e-services is not required to act as the fiscal agent of the foreign company. It is irrelevant whether the foreign company is registered with the tax authorities or not.

An exception is stipulated for companies and individual entrepreneurs acting as intermediaries for the provision of the services. They act as fiscal agents. In this case a foreign provider of e-services that does not perform settlements directly with their customers is not required to register with the Russian tax authorities and pay VAT in Russia.

Is the russian customer a fiscal Agent? 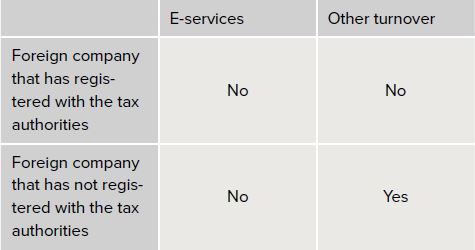 At the same time, the clarification letter does not cover the actual substance of the contract that must be concluded between the foreign company and the intermediary. Even though the law also mentions contracts of commission, agency and similar contracts, for the time being the material terms and conditions of such contracts for tax purposes have not been considered anywhere. This issue is relevant for foreign developers of software that they distribute in Russia through – Distributors.

The actions of fiscal agents are deemed legal

The tax service has recognised that if a foreign company is registered with the tax authorities, but the customer calculated, withheld and paid VAT on e-services or in respect of “other sales” and treated the tax as input VAT (or included in tax-deductible expenses), then the tax authorities may not recalculate its tax liabilities, in particular, disallow the deduction of withheld VAT. In addition, they cannot demand the repeat payment of VAT to the budget by the foreign company.

At the very least, in the case of e-services the position of the Federal Tax Service in this respect contravenes the provisions of effective legislation. At the same time, the clarifications can be considered a “compromise” between the business community and the tax service: to all intents and purposes, the Federal Tax Service has declared that it would not apply existing provisions in instances when the tax has effectively been remitted to the budget.

It is important for companies to understand that the position of the Federal Tax Service presented in the letter dated 24 April 2019 will not draw a final line on contested issues related to e-services. Firstly, the Federal Tax Service is required by law to adhere to the written clarifications of the Ministry of Finance on the application of legislation on taxes and duties. Accordingly, the expressed position may undergo changes as a result of the new clarifications. Secondly, the Ministry of Finance plans to improve the tax treatment of foreign companies providing e-services, in other words, amendments could be made directly to the Tax Code. Nevertheless the clarifications represent an important stage in the taxation of e-services in Russia, as they bring some clarity to certain outstanding issues.

Unfortunately, foreign companies performing mutual settlements for IT and telecommunications services with their subsidiaries in Russia will be compelled to register with the tax authorities in Russia even if this turnover is insignificant compared to their turnover from “non-electronic” services. Such foreign companies pay VAT on all their taxable turnover in Russia. That is why we recommend that companies look for new ways to structure intragroup transactions that would make it possible to minimize the administrative difficulties and costs incurred by the tax authorities‘ approach to collecting tax.

It is worth noting here the positive outcome from the clarifications: the refusal of the fiscal service to review tax liabilities and accrue fines in situations when the fiscal agent already paid VAT to the budget independently, despite the tax registration (or refusal of tax registration) of the foreign company.

Falk Tischendorf and Anna Lesova will be happy to answer any questions you may have about this article.